I began my studies with Elizabeth Fuller and Joan Perkins in 1999 and received my first Teachers Certificate (4th Grade) in 2004 and the second one (3rd Grade) in 2010.

I have worked with many Teachers and visiting Masters from overseas in Sydney and Tokyo and have also attended Conventions in Tokyo, Gold Coast, Brisbane and Sydney’s Fifty Golden Years in 2010.

I am also studying Ikenobo and started with Helen Coleman in July 2006 and am now studying with Aya Shibata.

My love of nature and flowers has taken me on another path that of Botanical Art which I have been studying since 2008. 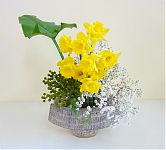