kebana has been Hiroko’s life long passion. She became serious about it in 1993 when she joined the “Ikebana Club” at Kyodo News Service in Tokyo where she worked full time and gained her first teaching certificate in 1998. After moving to Hong Kong she created an ikebana course at the local YWCA. In Singapore she became a student of the late Mrs. Kazue Kim, an extraordinary teacher who founded Singapore Sogetsu over 50 years ago. In Mrs. Kim’s late years Hiroko had the pleasure of assisting her with significant works such as the welcoming arrangements for VIP guests for the annual parties celebrating the Japanese Emperors Birthday. Hiroko created a custom made class and taught VIP clients at high-end brands such as Christian Dior and Mercedes Benz and also taught at Hort Park run by Singapore National Parks as well as teaching from home. She also performed numerous ikebana demonstration from small venues to big stages. As a committee member of Singapore Sogetsu, she helped organize various events such as an the annual Sogetsu Charity Gala dinner and often performed as the MC and a translator.
She moved to Sydney and she wishes to spread the joy and beauty of ikebana and most importantly to pass down this wonderful Japanese art form to the next generation.
Hiroko currently holds Sogetsu First Grade Komon 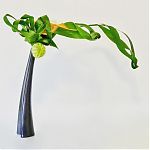